It looks like you're new here. If you want to get involved, click one of these buttons!

What is a concrete batch plant?

What is a concrete plant called?
Central-mix batch plants, also known as “wet batch” plants, are another primary method of concrete batching. Central-mix plants combine and mix all ingredients for the concrete before the mix is discharged into a mixing truck for transportation to a job site.
Anyone in the construction business knows the importance of concrete. No wonder this composite material is used to construct skyscrapers, sidewalks and bridges, houses and driveways, highways, and many other things around the world. After being set and formed, concrete acts as a durable material strong enough to hold up against some of the largest natural forces. Yet, concrete is “plastic” in that it can be formed and molded into virtually any shape before it is hardened. When it does harden, the quality of the concrete depends upon its properties as a mixture.

A mixture, you say?

Yes! Concrete does not form on its own and needs to be procured by employing certain procedures on its various constituents. The process involves getting the appropriate proportions of water and cement, sand and gravel just right so that a durable concrete product can be created. Indeed, if the mixture has even the least bit of excess paste or water, then the resulting concrete foundation will crack easily — conversely, rough concrete results from concrete mixtures that do not contain enough paste or water mixture. Clearly, any ordinary mixing techniques cannot be used here, and thus a specific piece of equipment is required.
Where is Concrete Mixed?
Usually, concrete is mixed in a concrete batch plant.

In a concrete batch plant, the various ingredients used to make the type of concrete being used — such as Portland cement, aggregates (gravel, crushed stone, sand, etc.), and water — are combined in a large, mechanical, and sometimes computer-aided machine, mixed and prepared for use at a job site. The end product (concrete) is then put to use as a raw material in laying down the basics of buildings and paving roads and other open areas. The piping of drains also requires concrete. 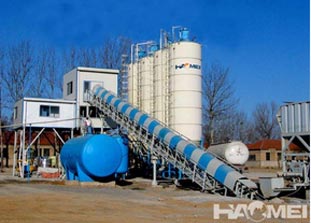 A concrete batching plant ideally has many more components to it. It is the assembly of tools and machines such as mixers, cement batchers, aggregate batchers, conveyors, radial stackers, aggregate bins, cement bins, heaters, chillers, cement silos, control. These accessories, in turn, are of different kinds. For example, mixers can be either horizontal or tilt up and of both types in certain cases.

Concrete can be mixed to a customer’s specific requirements and is sold and bought by volume (generally in bags ranging from 45 pounds to 80 pounds). This is why it is perfect for small construction or renovation projects in Dallas when you may only need to use half a yard worth of concrete.

Ready-Mix Batch Plants
When ingredients for the concrete mixture (barring water) are combined using a ready-mix concrete batch plant, the dry mixture is disposed of into a concrete transport truck where water is added to it. This gets the concrete ready for production. This mixing occurs when the truck is on its way to the job site.

There are basically three different options that you have if you are going to be using ready-mixed concrete:

The concrete mixer can be turned at slow speed while inside the drum during transit, at which point the speed for the mixing drum can be increased for five minutes to prepare the mixture.

The concrete mixture can be mixed at the mixing yard and only slowly agitated during transportation to the job site.

The concrete mixture can be turned at medium speed while inside the drum during transit so that it can be completely mixed by the time it reaches its destination.

Central-Mix Batch Plants
Central-mix batch plants, also known as “wet batch” plants, are another primary method of concrete batching. Central-mix plants combine and mix all ingredients for the concrete before the mix is discharged into a mixing truck for transportation to a job site. A fixed, plant-mounted mixer (that resembles a silo) is used to mix all the ingredients.

There are a number of advantages of using central-mix batch plants to mix concrete, such as:

Concrete can be mixed a lot faster in central-mix plants than in truck mixers.

Using a central-mix plant does not place as much strain or wear and tear on concrete-mixing trucks.

You can achieve an overall consistent mixture with a central-mix plant than you can with a truck mixer.